Always on the Line

Richard Ballard and Eugene Talley had no idea nearly five decades ago what lay ahead of them when they came on board at NAEC. Now, having worked at the cooperative for a combined 97 years, including service as linemen, both say that the lessons they’ve learned and the work they have done helped shape them into the people they are today.

“I work with some great guys, and we are a family,” Ballard says. “I never did dread going to work.”

In June, NAEC will be joining electric cooperatives across the state in expressing gratitude to these two men and all lineworkers on Alabama’s Lineman Appreciation Day. 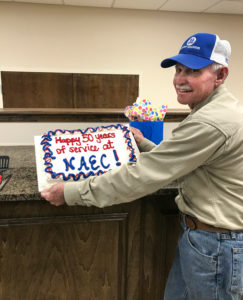 Eugene Talley began his career with NAEC in the summer of 1971. He was 19 years old, a recent Stevenson High School graduate, and it was just supposed to be a short-term summer job. Talley began driving a tractor to help clear brush with the crews. Then, he was asked if he wanted a job mowing under the power lines.

“They hired me for the summer, and when it was over they never did tell me to go home,” he says.

Talley eventually moved on to be a meter reader for about 14 years before joining the line crew 36 years ago. He went to the TVPPA lineman training school in Nashville and is currently a journeyman lineman.

He celebrated 50 years at NAEC on April 20, and he has no plans to retire anytime soon.

“As long as my health holds up I’m gonna keep going,” he says.

Talley found out he had stomach cancer in 2013, but that didn’t slow him down for long. “I had surgery, and the good Lord let them get it all,” he says. The cancer has not returned, and he has not had to undergo any treatments. 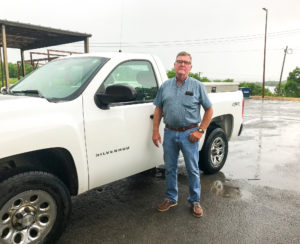 Richard Ballard was 19 years old when he began working at NAEC in 1974 as a recent graduate of Stevenson High School. He first had his sights set on playing football at Middle Tennessee State University, but soon after graduation, he felt like it was time for a change. “I decided I was tired of sports,” Ballard says. As he began looking for work, a local woman named Willie Wheeler told him the NAEC had job openings and suggested he apply.

“I came down and asked to speak to the manager, who was Gerald Ziegler at the time,” he says. “I told him I would take any job he had available.”

Ballard had taken correspondence courses while in high school that qualified him to start working at the cooperative. He went home, found his diploma, returned to the office and was hired on the spot. His career began as an apprentice lineman, and the second day on the job he was helping change out a transformer. “Someone had to climb the pole and change it,” he says. “My training was ‘on the job.’”

He worked on the line crew until May 1995, when he was promoted to operations superintendent. “I just went from doing the work to making sure everything was lined up and the materials were kept up with,” he says.

But, once a lineman, always a lineman. When the power would go out, Ballard would still go out and help the crews restore service.

In May, Ballard officially retired after 47 years of service. “I’ve had a million experiences here, and it was just a great job to have,” he says. “The people I worked with made the job easy.” 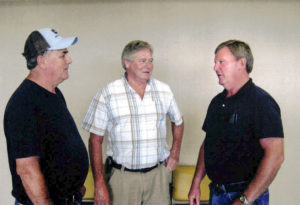 During their careers, both men have seen safety measures change for the better. “The boys do a really great job with safety now,” Ballard says. With modern advances in technology and equipment, the linemen are able to work in a much safer environment.

“Things run much more efficiently now,” Talley says. For instance, he says, at the time he and Ballard started at NAEC, there were only two bucket trucks for all the line crews. “When I went out, we were climbing. I think about every lineman at the co-op has their own bucket truck now. Back then, you had to climb every pole, no matter where it was at. One man can do a job that it took four men to do, like changing a transformer.”

A big part of the job was going to help other cooperatives whenever bad weather hit. Both men made dozens of trips during their tenure, but they agree that ice storms produced the most difficult working conditions.

“Once, when we went to Kentucky, it was about 19 degrees, wind was 30 mph,” Talley says. “My mustache was frozen over, like those mountain men on TV.”

After the crews were able to restore power, they came across a sign by the road, nailed to a post. Written on a piece of cardboard, the sign read, “Thank you, Alabama boys, for getting the power back on.” 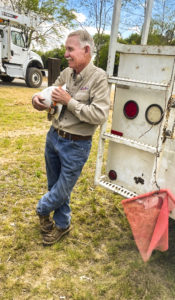 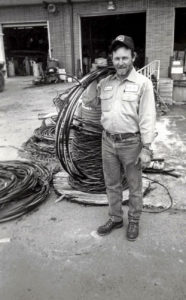