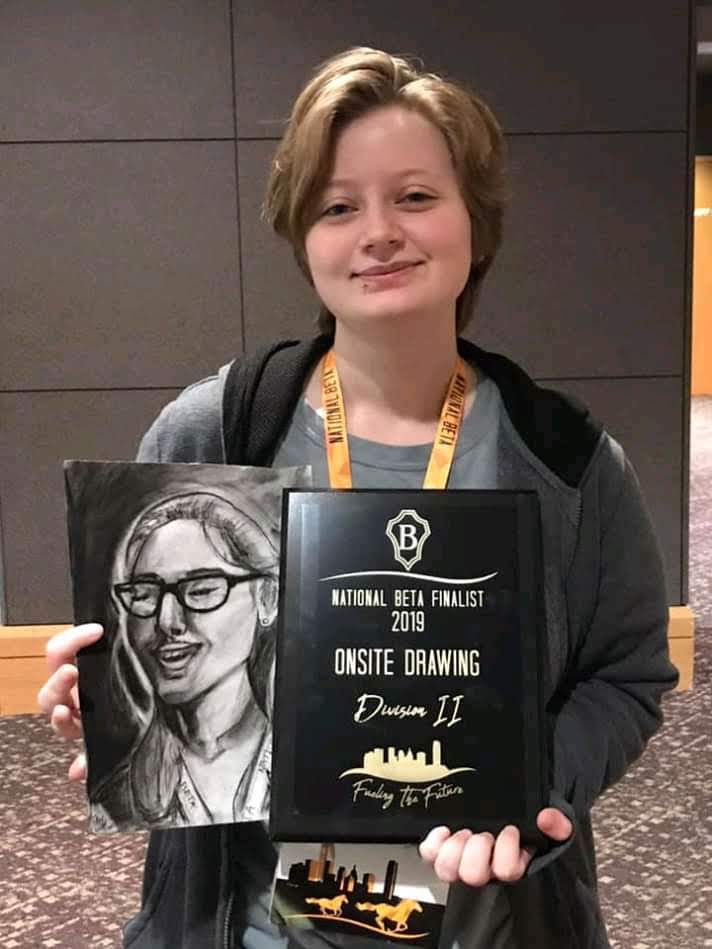 As her mother paced nervously outside the competition area during the 2019 National Beta Club convention in Oklahoma City this summer, Katelyn Waldrop, 18, feverishly sketched the likeness of a fellow competitor, who in turn created a portrait of Waldrop.

The goal was to create an on-site piece of art on any theme in three hours’ time and submit it for judging.
Waldrop had just graduated from North Jackson High School when the national competition took place in June at Cox Convention Center. She’d qualified to compete nationally by taking top honors near the end of her senior year in the Onsite Drawing Division II category at the Alabama State Beta Convention in Birmingham.

Her first-place winner at the state level was a charcoal drawing of a parrot, which she finished in about an hour. Participants in her category were allotted two hours to draw anything they chose.

“I mostly like digital and charcoal,” Waldrop says of her preferences in artistic styles, adding that she also enjoys portraiture and has dabbled in sculpture.

As a result of her win, Waldrop received a commemorative plaque and an invitation to the National Beta Club Convention, which drew about 20,000 attendees. This year’s theme was “Betas Fueling the Future.”

Waldrop says she didn’t let her nerves get the best of her at the national convention, even though there were about 20 other artists in her category.

“I was kind of nervous going up there, but while I was there I just kind of wasn’t nervous,” she says.
NJHS Beta Club sponsor Ashley Lee says Waldrop is among about 125 club members at the high school and one of several students who qualified to compete at the national level this year.

“I was so proud of Katelyn for competing in the competition and getting out of her comfort zone,” Lee says. “Her winning first (at state) was probably the highlight of that trip for us because she was so humbled by it. You could tell it really meant something to her. Seeing our students work toward something they are so passionate about and succeed is why I choose to continue doing what I do. I am so proud of Katelyn and cannot wait to see what her future holds.”

“I also taught Katelyn in several science classes, including Advanced Placement Biology, where she scored high enough to pass the AP exam and was awarded free college credit for her score,” she says.

When the national winners were revealed, Waldrop learned her portrait had earned seventh place.

Her mother and dad, Rhonda and Charlie Waldrop, are ecstatic about their daughter’s accolades at the state and national levels. They were aware of her artistic talents from an early age.

“Her drawings that she was bringing home from school would look good, and she would draw stuff at the house, so I started getting her drawing tablets back then to encourage her,” Rhonda Waldrop says.

An interest in art

Katelyn Waldrop says she’s been interested in art since about fifth grade. While primarily self-taught, she has taken an art class in school led by former NJHS art instructor Charity Troy.

Rhonda Waldrop says many of her daughter’s works adorn areas of their home and even the workplace. She hesitates to choose a favorite. “I have some in frames and some on the walls and on the refrigerator,” she says. “There are so many! She drew a dragon for my husband for his office, and I like that one.”

Although she’s not exactly sure where her daughter’s artistic inclinations came from, Waldrop says she has a few ideas — her own father excelled at drawing cartoon characters, and a great-grandmother on her husband’s side was very talented in music.

Katelyn Waldrop, who’s enrolled at Northeast Alabama Community College, has decided to continue her education and her artistry at the college level by pursuing a bachelor’s degree in fine arts. She hopes to eventually study at the Savannah College of Art and Design.

After that, she says, she has her sights set on working in concept art for the motion picture industry.