Neversink pit is a natural wonder

A caver looks up toward the light from the bottom of Neversink. Photo courtesy of Alan Cressler

Beneath the Appalachian foothills lies a whole other world.

Each day, people go about their lives on the surface, often oblivious to the entire ecosystem just underfoot. There are more than 17,000 known caves in Tennessee, Alabama, and Georgia, known in caving circles as the TAG system. A high concentration of those caves can be found in Jackson County, Alabama, including the very popular Stephens Gap Cave, Valhalla, and Limrock Blowing Cave Preserve.

Neversink is just one of several notable sites in the area, but it’s not an average cave. Neversink is an open-air pit, managed and preserved by Southeastern Cave Conservancy Inc. “It’s a natural wonder,” SCCi Vice Chair Tom Whitehurst says. The pit measures 162 feet deep, or about 15 stories from its 100-foot wide mouth to the bottom. A seasonal waterfall cascades into the pit, and in the summer months, the ledges are covered with ferns and moss. The temperature within stays around 60 degrees year-round, which means a welcome break from summer heat and a nice change from frigid winter temperatures at surface level.

Anyone planning on visiting Neversink to hike or enjoy some vertical caving must apply online to get a same-day permit. There’s no charge, but the permits help SCCi keep track of group sizes. Once you request the permit, you have to sign a liability release.

A primitive trail, a path without steps or pavement, begins near the site’s small parking lot. Hikers should make an effort to stay on the marked trail at all times. It’s about a 300-foot vertical climb to the top, where a bench is located. Take a right turn, and then Neversink will be in view. “I would consider it to be a moderate hike because of the slope,” Whitehurst says.

Inexperienced cavers or hikers should not try to descend into the pit. There’s no way in or out without using advanced roping skills. “We’ve had to rescue people who thought they could just climb out,” Whitehurst says.

To descend into the pit, one must rappel. Then, cavers must scale the rope to get out by using mechanical ascenders. “You just basically inch your way up the rope, and it’s really physically demanding,” Whitehurst says.

Visitors are urged to use extreme caution at all times near the mouth of the pit. The very bottom of Neversink simply isn’t visible from above. A good rule of thumb, Whitehurst says, is to keep at least a body length’s distance from the edge, even where the land is flat.

The bottom of the pit consists mainly of boulders. Neversink has no horizontal element, so it doesn’t have a cave that extends beyond the pit. But there are some inhabitants. “There’s a substantial ecosystem that includes salamanders and snails,” Whitehurst says. 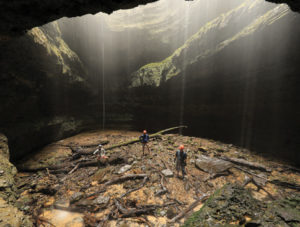 Whitehurst, a retired geologist for an environmental engineering consulting firm, worked in Texas until he semiretired in 2001. A former Alabamian, he moved to north Alabama in 2007, and his decades-long love for caving was revived.

“The TAG system is the mecca for caving in the U.S.,” Whitehurst says. “It’s not the Rocky Mountains or geysers, but if you want to see great things you can pretty much step out your back door.”

Organized cavers have known about Neversink for decades, but the site largely remained a treasure known only by locals until it was featured in a National Geographic story in the 1980s or ’90s.

Whitehurst started off exploring caves in 1969 as a spelunker outside of Birmingham, where he became acquainted with the local caving club. Spelunker is a term for a hobbyist who enjoys exploring caves. A caver is considered to be more experienced and interested in cave preservation, and in some cases, even mapping caves.

His father connected him with a former college roommate who was a serious caver. “We learned what you’re supposed to do and what you shouldn’t,” he says. 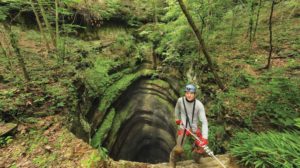 A caver prepares to rappel into the Neversink pit. Photo courtesy of Alan Cressler

Whitehurst became involved with SCCi in 1997 when the organization began a fundraising campaign for Neversink. He contributed to the fundraiser and joined SCCi in the process. “It’s kind of interesting how I came to be involved,” he says, “because Neversink was the cause of it all.”

When the property in the Fackler area came up for sale, SCCi decided to buy it to protect it from overuse, while still allowing access to the public. It was the third preserve acquired by the conservancy, following two other properties that were donated.

Exploring caves and sites such as these can be a fun adrenaline rush, but Whitehurst cautions visitors to respect the elements. “It’s OK to be a little scared, but it’s about understanding what Mother Nature is capable of,” he says.

Southeastern Cave Conservancy Inc. was formed in 1991 by a group of recreational cavers whose mission was to maintain and preserve caves. The group is based in Signal Mountain, Tennessee, and manages 35 preserves over a seven-state area. To learn more about the SCCi and to apply for a permit, visit the Save Your Caves website.