Stand and be counted
How the census shapes Alabama’s future

Once every 10 years, the United States counts its citizens and gathers a trove of helpful information that can influence politics, local businesses, schools, and much more. This year, participating in the census could even have a significant impact on how Alabama is represented in Congress.

States use census data to draw congressional district boundaries and to plan important infrastructure projects like building roads, improving schools, and supplying emergency services. Businesses even use information gathered during the census to determine new locations for stores, hotels, and more.

“So much of the funding states and cities get from the federal government is based on how we respond to the census,” says state Sen. Steve Livingston, who represents District 8. “Medicaid, Medicare, grants for education, student loans, Section 8 housing. The list just goes on and on for the ways the census impacts our state.” Congress has organized a census every 10 years since 1790, and those surveys have always helped determine how much representation a state receives in the federal government. Following each census, Congress determines if the number of U.S. House of Representatives members a state receives will be adjusted to ensure every district has roughly the same population and representation.

Since Congress shapes several policies for our nation’s government, each census can have a profound effect on the country’s political future. The 2020 census could prove to be the most important in Alabama’s history, with the results having repercussions in how the state is represented in the Capitol.

Since the 1970s, Alabama has sent seven representatives to Congress. But most projections indicate that number will drop to six following this year’s count. If the state’s population is undercounted due to limited participation, Alabama could even lose two seats in Congress. 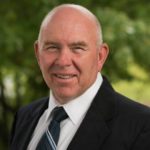 “If that happens, Alabama will have less influence in Washington, D.C.,” says Tommy Hanes, representative for District 23 in the Alabama House of Representatives. “I ask all Alabamians to fill out their 2020 census to help keep our state on track for a better future.”

Fortunately, it has never been easier to do your part and to be counted. For the first time, every- one can complete the census online, as well as by phone or by mail. You will still receive a census form by mail, but you will have the option of visiting respond.census.gov/acs to complete your census form.

The process is quick, easy, and completely confidential. Federal law forbids distributing the information gathered as part of the census for any purpose other than producing statistics, so Jackson County residents can be confident their personal information is kept private.

“Folks I’ve talked to told me it only takes five minutes to complete the census online,” says Livingston. “I’d say five minutes is a great tradeoff for the next 10 years.”

Alabama could lose funding and representation in congress if you don’t take the census. Take it today! It only takes 5 minutes!