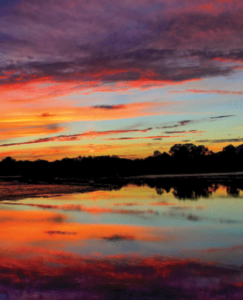 Kelly Stacy knows he can express how he feels about something verbally, but he prefers to use photographs to communicate.

“You can read a whole chapter in a book, but if you see one picture it explains a lot more,” he says.

A retired boilermaker, Stacy once spent his days working with construction crews to build power plants. Originally from Hindman, Kentucky, he ended up settling in Stevenson after his work brought him to the area.

Stacy always enjoyed dabbling in photography. But after his retirement in 2005, he began pursuing it with more passion.

“I started shooting film in the 1970s with a Yashica camera,” says Stacy, who now prefers Nikon equipment.

He photographs a variety of subjects, including wildlife and local scenic landscapes. Birds, however, are his favorite to capture. He’s spent hours sitting in a blind on his property, waiting for the right moment. The birds will eventually show up – especially if there’s food involved.

“You can chase them, or you can feed them,” he says.

His camera has captured a variety of different birds, including osprey, ducks, eagles, hummingbirds, and cardinals. He says the easiest bird to get photos of is the hummingbird because of it’s predictability of showing up at the feeder. “They’re all colorful and different,” he says of the tiny birds, but they also present a challenge, which he loves. “They’re only still for a split second.”

Stacy says inspiration comes from the drive to always improve himself and hone his craft. “You never get the perfect picture,” he says. “I like the challenge of picking the right light. That’s the most important thing: light.”

In fact, light is so important in making or breaking a photo, Stacy has been known to scope out a scene at different times of the day, waiting for the light to be perfect.

Once, while on a drive with his wife, Deborah, he pulled their car over at the bridge near South Pittsburg, Tennessee. “It took me five years of watching that bridge to get the right light for a photo, and I knew I had to get one that day,” he says.

Since rekindling his love of photography, Stacy sees the world around him in a new way.

“I love to get out in nature,” he says. “You just start looking at things differently. Like the old barn, I see regularly. I start thinking, ‘If I come back later in the day, the light will be much better.'”

It isn’t just the barn Stacy cares about, but the entire scene. He considers it to be a story he has to tell without using words.

“I just let people make their own judgment,” he says of his work. “I don’t want to pollute their mind.”

Stacy says if you’re learning about photography, the first step is to gain knowledge about aperture, ISO, and shutter speed.

“Shoot in manual mode,” he says, “You’re never going to learn photography until you twist a few dials.”

But the real secret to good photography, he says, is just having fun and doing it because you enjoy it.

“Just take pictures of what you like,” Stacy says. “If no one else likes it, it doesn’t matter. Don’t make it hard, and don’t be hard on yourself.”