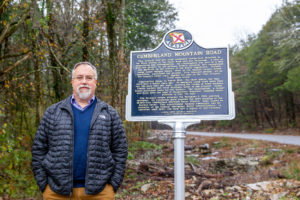 Judge John Graham says the marker was a community effort.

In the wake of the Great Depression, a road brought a glimmer of hope to Jackson County. The Cumberland Mountain Road provided access from the remote Cumberland Mountain to the Paint Rock and Tennessee River valleys, allowing commerce to begin again after many years of isolation for the region.

Eighty-seven years after the road’s completion, the Jackson County Historical Association unveiled a historic marker at the base of the mountain to commemorate the road’s significance.

To honor the efforts of the New Dealera project, the Skyline Farms Heritage Association hosted a barbecue picnic lunch at the home of Dr. Mark Reece and his wife, Lisa, in the Tupelo community. The featured dessert was a sweet potato pie, a nod to farmer Hal Cunningham.

He once lived at the base of Cumberland Mountain. During road construction, he provided sweet potatoes from his farm to feed the workers. When construction of the road was complete, 1,000 people attended a celebration lunch on November 1, 1933. 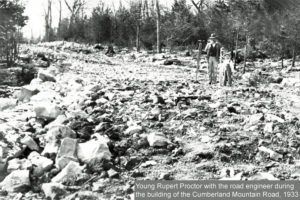 Young Rupert Proctor with the road engineer during the building of the Cumberland Moutain Road in 1933.

Graham says the idea for the marker came up at a Skyline Farms Heritage Association meeting several years ago. Many people, including descendants of those who built the road and of the Skyline Farms Colony, showed up for the food and socially distanced fellowship to celebrate and honor the importance of this moment.

Skyline Farms, originally called Cumberland Mountain Farms, was a settlement developed on 18,000 acres of land purchased by the federal government. It was established when the Cumberland Mountain Road was completed. Settlers were given livestock and other resources needed to survive, and they built homes and other colony buildings with the materials they harvested from the land. They were able to pay back the low-cost loans from the government from the profits from their farms. Skyline Farms operated until 1945.

The 5-mile stretch of road that covers 1,300 feet of elevation was the vision of Probate Judge James Morgan Money, chair of the Jackson County Relief Committee. At the time of its completion, that road was considered a significant engineering accomplishment. The road was built in seven months for $12,473.75. 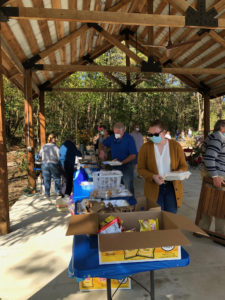 Those in attendance enjoyed a barbecue lunch at the dedication service.

Construction began in March 1933, and out of 5,000 locals who applied to work on the road, 3,500 were hired. Men who were paid $1 per day could not work more than two days each week — for 10 hours each day — so others could also have a chance at employment.

“The men did not have a single piece of machinery,” says Joyce Kennamer, lifelong resident of Jackson County and daughter of Judge Money. “They had a couple of oxen, axes, shovels and dynamite. They built that road, which was known at that time as one of the best roads around.”

She recalls hearing stories of her father making a very special trip to Birmingham with her brother.

“So many of these men did not have shoes suitable to work in gravel and rock,” she says. When construction began, the Depression had been looming over the country for years, with the residual effect felt in the farthest reaches of the country. Shoes were scarce.”

At the time, many adults did not have work shoes. Money went to Birmingham and bought work boots for the ones working on the road who did not have any.

“My daddy was a great man and a great philanthropist,” Kennamer says.

She was just 3 years old at the time the road was finished, but Kennamer can vaguely remember traveling it. 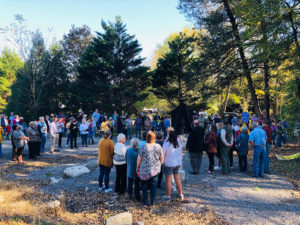 A crowd of people came out to the November 1 dedication of the Cumberland Mountain Road.

“I was scared of the curves and would get down on the floorboard of the car,” she says. “Compared to a lot of roads at the time, it was a really good road, and it did its job. It got you to Skyline and from there you could cross into Paint Rock valley.”

“When I first went there in 1966, very few of the children knew what I was talking about when I referred to the colony,” she says. “I taught them their heritage. I would tell them, ‘You have a wonderful heritage.’”

The marker sits at the base of Cumberland Mountain as a proud reminder of the resilience of a community and strength of the people.

“I hope it always stands as a monument to Judge Money’s vision,” Graham says.