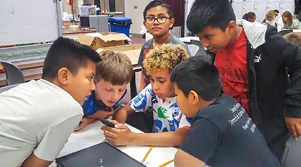 Children work on a project during the CCLC program.

This summer, students at Stevenson Middle School got a head start on learning leading into the new school year thanks to Alabama’s 21st Century Community Learning Center (CCLC) program.

“It’s such a wonderful program because the funding is wonderful,” says Dionne Sartin. “It was designed to bring more hands-on experiences to the students that they don’t normally get during the school day.”

Sartin, who is starting her 18th year teaching at Stevenson Middle School, is the site coordinator for the school’s CCLC program.

During the school day, she focuses on teaching sixth-grade math, but after school, she gets to help guide students and broaden their horizons.

The federally funded CCLC program began in 1980. Schools apply for grants to participate, and those grants must be renewed every three years. Stevenson Middle School has been running the program since 2010. Free for fifth through eighth graders, the program draws about 40 Stevenson students in the summer months, and during the school year, around 20-30 participate.

More Than a Normal School Day 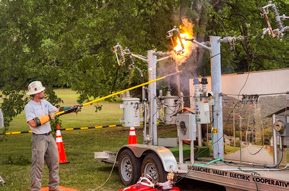 One of the trade demonstrations the CCLC brings to the program are electric linemen.

“The linemen talk to kids about the dangers of electricity, safety precautions, and they also show examples of how the city is wired,” Sartin says.

The children watch a kid-friendly demonstration that explains electricity safety tips, including what not to do around electric poles and power lines. They also get to experience what it’s like to dress like a real lineman when they try on the big rubber gloves and hard hats.

“The kids were really interested. They love anything that’s new and not part of the norm,” Sartin says.

Teaching the students about being safe around power lines is important, but NAEC lineman Steve Patton enjoys doing the electrical demonstration for children because other than education, his visit also serves another purpose—he could possibly be inspiring the next generation of linemen.

“We love being able to teach these students about the importance of safety, but we also want them to see that they could have a career in the electric field,” says NAEC General Manager Bruce Purdy. “They get a chance to see how our linemen do their job and the equipment they use. It’s a great opportunity for them to learn more about our industry.”

At the World’s a Classroom 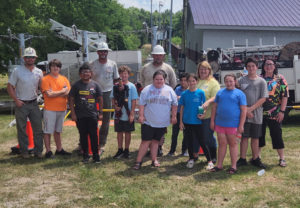 During the summer program, the kids take a field trip each week. Sartin tries to make each trip a special occasion, which includes hiring charter buses when she can. This year, the kids visited Cook’s Museum of Natural Science in Decatur and the Birmingham Zoo. They also got to ride the Chattanooga Duck Boats and go indoor rock climbing.

Burritt on the Mountain, a historic landmark in Huntsville, brought history to the students this year. The open-air museum’s property includes several 19th century cabins and a blacksmith shop, and employees dress in 1800s clothing to give tours and demonstrations. “They came to the school and taught kids about the way of life during that era and made cornhusk toys with them,” Sartin says.

The children also rolled up their sleeves and worked on service learning projects like a community garden.

“The kids planted, grew and picked the produce and we distributed it into the community,” Sartin says.

Educational demonstrations included music and cooking lessons, art projects and even a career fair with teachers from the local trade school discussing different trades with the kids.

Ms. Jan, The Science Lady from Dynamic Education Adventures, comes each month during the school year and visits weekly during the summer months. She guides the students as they perform experiments like freezing food with liquid nitrogen, dissecting a cow’s eyeball, building stomp rockets and learning about kinetic and potential energy.

Sartin believes the most positive impact of the CCLC program is inclusivity.

“You always have those children who aren’t into sports or band. Our program gives them a sense of belonging,” she says. “It’s free, so it gives them a lot of experiences they wouldn’t normally get to have.”

And, they keep coming back.

“What means the most to me is when the students begin coming in the fifth grade and they’re still there in the eighth grade,” she adds. “That’s four years of them dedicating their life to us, and that means a lot.”

To help ease some beginning-of-the-school-year nerves, Sartin began inviting students who will be starting fifth grade to come to the summer program. Getting to know the building and some of the people helps the transition to a new school go a little more smoothly.

“I really believe in the program and see the benefits of it,” Sartin says.