“The Fox Den” includes an interactive mural painted by artist Sonya Clemons. This space has been a wonderful addition to juvenile court and is used by families each week. Photo courtesy of Erica Kirkland-Weeks

Many children in foster care were removed from their homes due to their parents’ struggles with substance abuse. A successful program in Jackson County is devoted to helping parents overcome their addictions and teaching skills they need to rebuild bonds with their children.

The Jackson County Family Wellness Court began operating in 2016 with two participants. Earlier this year, the participation level stood at 30, all working to put their families back together.

Unlike drug court, where defendants facing criminal charges are court-ordered to complete the program or else serve a prison sentence, participation in family wellness court is voluntary.

“The parents that are walking through my door are parents that want a better life, want to be better parents, want to be clean and sober. And they’re doing it completely on their own,” says Erica Kirkland-Weeks, the court’s coordinator. “They’re choosing to get help, to take parenting classes, and to go through counseling. They’re choosing to work through their trauma to become better parents.”

The majority of participants are battling methamphetamine addiction, with prescription pills as the second-most commonly abused substance. Although offered to men and women, most participants are mothers. “That’s been a consistent pattern since we started,” Kirkland-Weeks says. “Our numbers are consistent with our referrals. We receive more female referrals than we do male referrals.”

Parents are referred to the program by the Alabama Department of Human Resources, medical facilities, or attorneys. Some come in on their own. They all have children in foster care or are on the brink of losing custody due to substance abuse.

“They usually have not been clean very long, or may not be clean at all, when they walk in our doors. It does take time for the drugs or alcohol to be out of their system and for them to level off,” Kirkland-Weeks says. “There are a lot of emotions that go along with that. They could be angry at their family members or angry at DHR and placing the blame on them instead of themselves, but also devastated that they caused this themselves. It’s just a whole bundle of emotions when somebody comes in the first time.”

The court also serves pregnant women. “You would much rather have a woman enter treatment when she’s two months pregnant than go through an entire pregnancy using, and then the child being placed in foster care when it’s born,” Kirkland-Weeks says.

Participants are responsible for meeting a number of requirements beyond treatment, including, but not limited to, random drug screens, attending two self-help meetings each week, and completing Strengthening Families, an evidence-based parenting program. Twice a month, participants attend a hearing with Judge Don Word to update the court on their progress.

“Studies have shown that with the accountability of treatment courts, parents just tend to do better. They get their children back faster and they have fewer recurrences of custody issues in the future,” Kirkland-Weeks says. “It’s not that they’re scared of the judge. There’s a lot of respect there. There is lots of encouragement, but if they’re not completing their requirements, there are sanctions.”

The court also offers individual and family counseling, tutoring for the children, a room that can be used for supervised visitation, art therapy, and more. As long as participants stay sober, the program can be completed in 12 months. 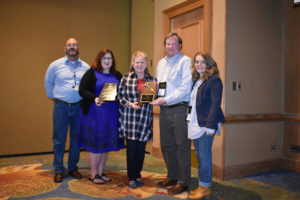 The court’s long-term goal is to reduce the number of days children spend in foster care, and the results of a recent evaluation completed as part of one of the program’s funding grants shows that goal is being met. “National studies show that parents who go through a family treatment court tend to get reunited with their children sooner and they have fewer occurrences of DHR later on,” Kirk- land-Weeks says. “Children were returned to safe homes 9% faster in 2019, which equated to 41 days sooner, resulting in a total of 1,436 days less spent in foster care last year.”

Since its inception, 18 participants have graduated the program, and 32% of enrollees were discharged from the program. The court now holds four graduation ceremonies every year and provides each graduate with the gift of a family fun day of their choice, such as a trip to the zoo or a train ride with Santa.

The ceremonies are emotional events, with participants inviting their families to the celebration. “It’s amazing to see the difference in parents from when they walk in and then the day they graduate,” Kirk- land-Weeks says. “The physical transformation, it’s just amazing. They’ve matured, they’ve grown, their bonds have gotten stronger. It’s emotional for the kids, too, because they’re excited to finally be home and be a family again.”