There’s just something about a horse. Kara Stephan couldn’t stop herself from getting involved when she got word about a horse that would soon be killed because of a fractured leg. She decided to rescue her, and she named her Hope.

But, Stephan didn’t just find Hope for herself. She and her mother, Kaye Bough, are also sharing hope with veterans and horses through Kindred Hope Rescue and Sanctuary in Skyline.

“Kara has a way with horses,” Bough says, adding her daughter was born with a love for the animal. “She’s a horse whisperer.”

In 2018, Stephan was living and working in West Texas, and she realized she missed having horses in her life. She hadn’t had a horse in 30 years, and she felt compelled to begin rescuing horses from being slaughtered or sold to less-than-loving new owners. 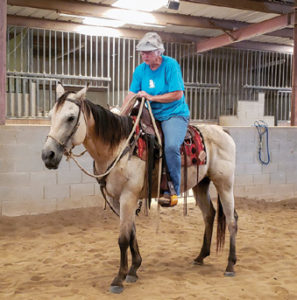 Bough’s husband, Hubert, passed away in 2019, and she decided to move to Texas to be near her daughter. But a month after Bough purchased the property and plans were in motion to make the move, Stephan got news that she had been let go from her company. So Stephan — and five of her rescue horses — moved to Skyline to be closer to her mother. Together the duo began plans for Kindred Hope Rescue and Sanctuary, named in honor of the first horse Stephan had saved back in Texas.

“Mom was excited we would be together, but she had been planning on volunteering with a Veterans Administration hospital,” Stephan says. “When my dad was sick, they took such good care of him. So, she wanted to pay it back.” Hubert served in Korea with the Army Corps of Engineers.

Since the nearest VA hospitals are more than an hour’s drive from Skyline, Stephan and Bough started making plans for how they could help closer to home.

“Some vets in our area have to go to Birmingham, and to volunteer there it would be too time-consuming,” Bough says. “We wanted something more local so we could help. We wanted to be more hands-on in helping the veterans. We help with fundraising, but it’s not personal enough for us. We want to know we can really help and make a difference.”

The ladies are members of the local VFW Auxiliary, and they hear about how veterans struggle, especially with PTSD. “We lose too many veterans to suicide,” Bough says. “If we can save one or 100, that’s what we want to do. We thought, ‘How can we help?’”

“We just combined the two things we wanted to do,” Stephan says. “We love horses, and we have a heart for helping others.” 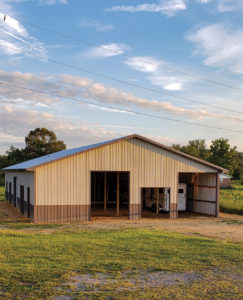 The facilities at Kindred Hope Rescue and Sanctuary are located in Skyline.

Through their research they learned that just being around animals, particularly horses, can have a soothing and therapeutic effect on people. “Even if they don’t ride, symptoms diminish by 68%,” Bough says.

In early 2020, construction began on their property, and their dream started to take shape. By August, Kindred Hope Rescue and Sanctuary officially became a nonprofit organization and now has 501(c)3 nonprofit status.

Currently, the sanctuary houses four full-sized horses, two mini horses, and a donkey. There are links on Kindred Hope’s website to schedule appointments to spend time with the animals. The horses are tacked up and ready to be ridden, but if people would rather groom and brush them, that’s acceptable, too. The interaction doesn’t just benefit the people who visit Kindred Hope, it also does a world of good for the horses. Stephan says she plans to continue offering the space as a sanctuary for rescued horses.

“These horses have been abused, and they have to learn to trust again,” Stephan says. “A horse looks at you and looks into your soul, and I believe that.”

Though the mother and daughter began this journey with their main focus on veterans, they also serve first responders and anyone in the community who’s coping with trauma, stress, or anxiety. It’s all about finding a way to help others.

“We believe God has a purpose for us,” Stephan says. 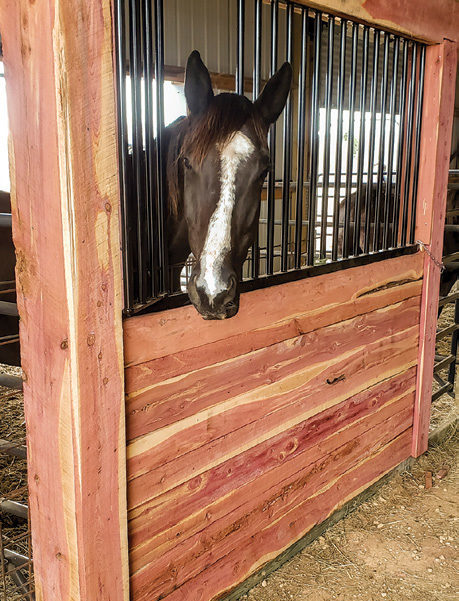 Gracie, one of the rescue horses, waits for a treat in her stall.

A group of veterans from a local VFW chapter recently visited Kindred Hope.