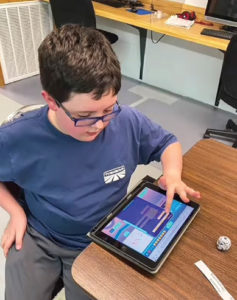 Quade Little uses block code to work his way through an Ozbot challenge.

It’s a Tuesday morning, and Alyssa Cosby can’t wait to get to work. She slides her key in the lock, opens the door, turns on the lights and readies the Woodville Public Library for another day.

This routine isn’t new to Cosby. In fact, she’s been walking through the same door at the library since she was 6 years old.

“I remember watching PBS Kids, and they mentioned the book ‘If You Give a Mouse a Cookie,’” Cosby says. “That was the first book I ever checked out from the library, and I’ve been coming here ever since.” As a child, she began coming to the summer reading program at the library. “It was so much fun, and we did crafts and there was music,” she says.

Cosby, a lifelong Woodville resident, considered herself introverted when she attended high school, but she had a big heart for helping others. She saw a need in her school and community, and felt conviction to help during Christmastime when the Students for Christ club was choosing children to sponsor at the holiday. “I thought that was awesome, but if people needed help during Christmas, they also probably needed help the rest of the year,” she says. 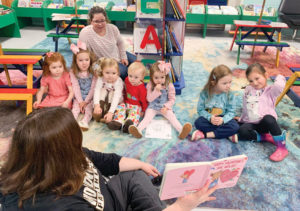 Alyssa Cosby reads to the preschool group that meets at the library.

Initially, Cosby went to her mother with the idea, and with her encouragement, approached a teacher and school administrators to get the ball rolling. After garnering support from other students, she helped establish PALS, Panthers Always Living Strong, during her junior year.

“I was so shy,” she says. “Getting me to talk was almost an act of God, so it took a lot for me to approach people at first, but I’m glad I did.”

Cosby, along with other club members, would meet and pack bags with nonperishable food items to help the students who didn’t have access to nutritious meals outside of those served at school. She estimates around 50 kids received assistance that first year. Now the count is up to 80.

Cosby embraced the club’s slogan — Panthers Always Living Strong, Children Never Walk Alone — and even got a tattoo of the words after she graduated in 2014. Now, private donors and sponsors help the club raise funds for food at Cosby’s alma mater, and she steps in and does the shopping when the sponsor isn’t able to.

The library has been a constant throughout her whole life, especially when it came to completing her schoolwork. Cosby stopped in several times a week to use the computers to work on her bachelor’s degree online. Quickly, she became friends with Karen Chambers, the former director.

“When I graduated from high school, I didn’t really know what I wanted to do or who I wanted to be,” she says. Originally, Cosby planned on earning a criminal justice degree and attending law school, which she did — for three days. “I got awesome scores on my LSATs, I just realized I really didn’t like it,” she says. 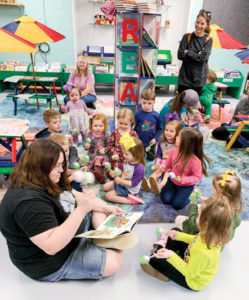 The preschool reading group shakes their maracas while Alyssa Cosby sings the lyrics to “The Seals on the Bus.”

In April 2020, the library flooded and Cosby volunteered her time to clean things up and get the library put back together. She also served on the library board as the secretary. By August, she still found herself there helping as she could.

“I was really let down that my plan didn’t work. I thought I was going to be a lawyer,” she says. “I didn’t think there was anything else I really wanted to do.” So, she decided to help out at the library and tutor people online. By April 2021, Chambers had to take personal leave, so Cosby stepped in and ran the library in her stead. Sadly, Chambers died in January 2022. She was the director at the library for almost 40 years.

During her time as the interim director, Cosby applied for her master’s degree in library science when she had a revelation while watching the movie, “The Reading Room.” In the movie, James Earl Jones opens an inner-city library to help kids.

“I just wanted to do outreach in the community,” she says. “I thought I would be a lawyer and have an office where people could just come and read books, but God was shaking his head saying, ‘No — that’s what a librarian does.’”

Cosby officially became the library director in September 2021. “I realized it’s what I’m passionate about,” she says. 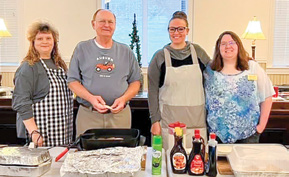 Cosby still lives by the slogan for the club she helped established years ago. Through her work at the library she organizes various programs for children and older students. This year’s summer reading program theme, Oceans of Possibilities, is open to pre-kindergarten children through sixth graders. There will also be a program for kids in grades seven-12. Plans are in the works to feature entertainment, like Mr. Bond’s Science Guys, Yarbrough’s Educational Reptiles, the U.S. Space & Rocket Center and The Latham’s Dazzling Magic.

“Summer programs are important because it gives the kids something to do and it helps broadens their horizons,” she says.

Cosby believes attending these programs is also important because kids get the chance to make friends, and it encourages a sense of community. “Kids form valuable skills at this age, it’s important to pour into them and nurture them,” she says.

In 2019, Cosby applied for and received a Google grant for the library. The operation was awarded $14,000 to be used for different kinds of robots and the software that goes with them. By the fall of 2021, Cosby began the STEAM (Science, Technology, Engineering, Arts and Mathematics) program for kids.

There are 12 kids, ranging from grades one to 10, who learn block coding at the library. They use a program called Scratch, where they can draw original characters and make short videos by coding, much like how an animated film or video game would be made.

“The longest video we’ve had is about three minutes, and any changes that have to be made are very tedious and time consuming,” Cosby says.

Recently, the kids have moved on to programming Ozbots, which are little robots that run on two wheels. The class is making an original racetrack and creating stories for the robots. “The kids love it,” she says. “The youngest kid is a first grader who already reads on a fourth-grade level, and he’s decided he wants to be a video game designer.” The library also currently hosts a teen book club. An adult poetry club and senior citizen game day are being considered for the future.

“If I’d stayed in law school, I would’ve hated my job every day. Now that I’m a librarian, I can’t wait to get to work,” she says.