Grow with the Flow

When most people think about gardening they think about tilling soil, planting seeds, monitoring the sun, and hoping for rain. While that is the most common way to grow food and other plants, there are alternatives that have many benefits, including hydroponic and aquaponic gardening.

Both methods involve growing plants in water instead of planting the roots in soil. In hydroponic farming, plants are provided with the nutrients they need to thrive through the use of water-soluble fertilizers — a process known as “fertigation.” Aquaponic farming is similar, but instead of receiving nutrients from fertilizers, the plants are fed by the fish that are being raised in the same environment.

Although there is scholarly debate as to whether or not they ever actually existed, the Hanging Gardens of Babylon, one of the Seven Wonders of the Ancient World described in legends, could be considered a hydroponic operation. The gardens are said to have consisted of terraces that stood about 75 feet high, lush with green plants watered by a primitive irrigation system.

William Frederick Gericke is considered by many to be the father of modern hydroponics and is credited with coining the term. In the 1930s, Gericke, a professor at the University of California at Berkeley, developed his soil-free system of agriculture and grew tomato plants that towered over 25 feet high using only water and a nutrient solution.

According to Mollie Smith, Auburn University Outreach Programs Coordinator for aquaponics, hydroponic farming is a method better suited for those who want produce crops but have no interest in fish farming. For farmers looking to raise both, aquaponics is a productive, efficient, and cost-effective way to go about it. 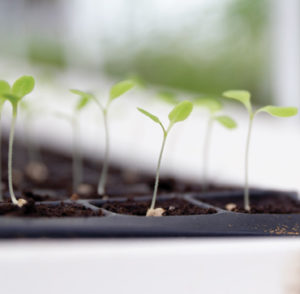 “Aquaponics is suitable for fish farmers who are already feeding commercially manufactured diets to fish, accounting for up to 60% of their production costs,” Smith says. “Aquaponics sees incredible water savings by growing plants and fish in the same water. The fish consume the feed, convert a portion of that to fish flesh, and excrete the remainder as ammonia. Bacteria in the water convert the ammonia first to nitrite and then to nitrate suitable for plants.”

Both methods are done in a controlled environment, significantly reducing the threat of pests destroying the crops when compared to traditional farming methods.

Although the idea of fish waste fertilizing water is a great plan, not just any species of fish will work. Tilapia are highly recommended, because they can easily adapt to different conditions and they are also less likely to contract parasites or other pathogens. Specifically, Nile Tilapia are the most popular fish to use in an aquaponic system, according to Smith.

“Nile Tilapia are also a tropical fish and cannot live outside in our temperate climate,” she says. “Since this species would need to come inside a building or a greenhouse from October through April, they are a good candidate for growing in confinement and capturing their wastes.”

Depending on other variables, some fish that would be suitable to use would be koi, crappie and catfish, to name just a few.

Both hydroponics and aquaponics are important methods of growing crops. Food can grow indoors — whether that’s inside a large, commercial greenhouse or on someone’s kitchen windowsill. Moving the growing process indoors, where the environment can be closely monitored controlled, allows people to grow food year-round.

“These types of gardening are important for producing food in environments where either space or water is limited and preventing contamination of the local environment through nutrient runoff,” Smith says.

Give It a Grow