Heartbeat of the Community 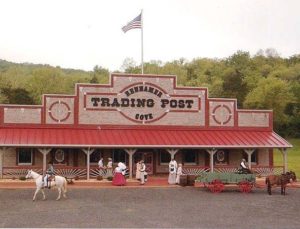 Several family members dressed up to pose for a photo depicting what the store would’ve looked like in the past.
Photos contributed by Cheryl Kennamer

When people walk into the Kennamer Cove Trading Post, they take a step back in time. The building evokes the nostalgia of an old-fashioned general store with its wood and stonework, local crafts, and a sense of community. The Trading Post is the center of the community known as Kennamer Cove, located on Cathedral Caverns Highway.

“That’s what I love about this place,” owner Cheryl Kennamer says. “Sometimes people come in and they just need to talk to somebody. I feel like I have a ministry here where I can help others.”

Kennamer is a one-woman operation when it comes to making sure things are running smoothly day-to-day at the Trading Post, which is also a venue space for local events and gatherings.

Her husband and son — Steve and Chris, respectively — built the Trading Post.

“It took them five years to build,” using lumber cut and milled by Steve’s father, she says. “Steve’s dad and his family have all lived here for generations. The Kennamers are now all over the U.S., but this is where they got their start.”

Kennamer Cove is located in a valley surrounded by a lush landscape of pines, rolling hills and ridges. Some the area’s first settlers were ancestors of the Cherokee, and the cove eventually became part of the Cherokee Nation in the early 1800s. The land was rich in resources and game, and the river was the lifeblood that meandered through the valley. 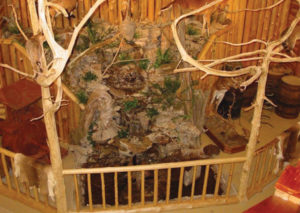 Steve and Chris Kennamer built an indoor waterfall feature with rock from their property.

In 1815, the majority of the Hans Kennamer family moved from Mississippi territory to settle into the cove, which later became known as Kennamer Cove. The families lived and worked on the land and watched Mississippi and Alabama enter statehood, which meant the cove officially became part of the United States. In 1830, the Kennamer families purchased the property from the public land office in Huntsville for $1.25 per acre.

Cheryl and Steve Kennamer purchased the property as newlyweds, initially unaware of the details of the area’s history. Work began to build the Trading Post in 1997.

“When Steve and Chris built the building, I don’t know if they really had a plan or not,” Cheryl Kennamer says. “I just tell everyone my husband built me a job.”

The building began as a gift shop, but it evolved into an event space for people who need somewhere to celebrate birthdays, family reunions, Christmas parties, and weddings. There’s an upstairs wedding chapel and a large banquet room that’s very popular.

Unique features like a grinder from an old grist mill are displayed in the Trading Post, along with a moonshine still that was used up until the 1980s. An indoor waterfall was crafted using stones the Kennamers carried by hand from their property. The interior is a unique blend of cedar and walnut, which creates a two-toned effect. Parts of the floor, though concrete, were hand stamped to look like wood.

Deborah Holder McBride, an art teacher at the DAR school in Grant, painted murals on the walls in the banquet room depicting the four seasons and what the cove likely looked like when it was first being settled. She used photos of old home places, including the old Butler Mill, as references.

Life of the Party

Two murals are displayed in the banquet room, along with detailed woodwork.

While there is an endless to-do list of tasks to accomplish when coordinating events, Kennamer has it down to a science. “I can do pretty much anything,” she says. She offers everything from setting up the tables and chairs to renting linens and even doing the cooking.

While running the event space and the shop keep her busy, she finds fulfillment in her job and says it’s a real labor of love. “I am a people person, and I love doing extra things for people,” she says. “I like to go out of my way to make sure things are right.”

The Trading Post welcomes visitors to browse through the gift shop, which features handmade crafts. Kennamer makes the items herself, including aprons, ornaments, sock dolls, and painted gourds.

Growing up, Kennamer was not always as outgoing as she is now. “I hated being that way, so I did a lot of praying and the Lord took care of it. He might be regretting that now,” she says with a chuckle.