When NAEC lineman Jason Johnson enlisted in the Marines in 2001, he didn’t fully understand what serving his country meant. But he learned.

“The greatest men and women serve in the military,” he says.

Each year on November 11, we observe Veterans Day to honor the men and women who have serves the United States both in war and peace. Just over 18 million Americans have been in the military or currently serve.

In 1938, Armistice Day was created to honor veterans of World War I, which ended on November 11, 1918. After World War II and the Korean War, the 83rd U.S. Congress in 1954 amended legislation and changed Armistice Day to Veterans Day, creating an opportunity to acknowledge all veterans and active-duty military members.

“I think everybody should honor the veterans,” says retired NAEC lineman Bob Harrison. “We wouldn’t be able to do what we do around here if not for the veterans – we wouldn’t have a free country.”

Many veterans have worked at NAEC over the years, and the skills gained from their military experience translate well into the civilian workforce.

“In the Marines, they work you hard,” Johnson says. “There are no sick days in the Marines. That’s where I learned to work hard.” 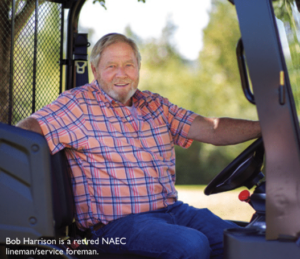 In 1966, Harrison received the news that he had been drafted to join the U.S. Army. He was 20 years old.

“I was fearful, had no idea what was going on or what to expect,” Harrison says. He would be carrying on his family’s tradition of serving in the military. His father was also in the Army, and his brother was in the Navy.

After receiving his orders, Harrison was sent to Frankfurt, Germany. Like everyone else, he went through infantry training. But he ended up working as a telephone installer because of his previous experience working for South Central Bell after graduating from Stevenson High School.

“I really enjoyed it, and I liked the Army,” he says about his time there.

Harrison loved being able to see and explore his new surroundings while he was overseas, but he says that things were a little different when he came back to Alabama.

“Things are regimented in the Army. When you come back home, you’re on your own,” he says. “I was a little cleaner and neater about things, and I have a lot more respect for people out there. I was glad to get home, but I really liked it.”

when Harrison came home from Germany in 1968, he found a place to live in Bridgeport “temporarily” until he could find somewhere more permanent in Stevenson. As time passed, he became content in Bridgeport and has been there ever since.

In October 1968, he came on board at NAEC as a lineman/service foreman and absolutely loved the work he did. “I got to help people,” Harrison says, “and that makes you feel better, you know when you get to help somebody.”

He enjoyed reporting to work daily, excited for the challenges each day would bring. “I liked the type of work we did. It was hard, but I enjoyed it,” he says. In October 2008, 40 years after he began work at NAEC, he retired from the job he loved so much.

Harrison has stayed busy in retirement, doing woodworking projects, welding, and riding his motorcycle. He is a member of First Baptist Church in Bridgeport and is also a Mason. A lot of his time is spent keeping up the land around his home, mowing and bush hogging. Harrison and Betty Ann also own the Three Oak RV Park in Bridgeport.

In early September, Harrison completed his last round of chemotherapy to treat his third bout with cancer and was recently declared cancer-free. “It’s not slowed me down,” he says enthusiastically. And it certainly hasn’t. 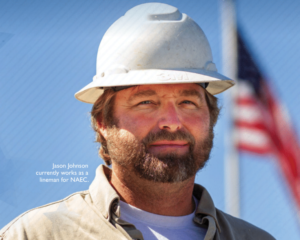 Johnson was in Marine boot camp at Parris Island, South Carolina, when he heard the news about September 11, 2001, terrorist attacks.

“I’ve got myself into something now,” Johnsons says he thought after hearing what had happened.

There were no televisions at boot camp. All he knew was there had been an attack, and that fueled his desire to serve even more.

“I wanted revenge,” Johnson says. “There’s no other place I’d rather been at that point in time.”

He was freshly graduated from North Jackson High School, with a burning desire to serve his country and following the footsteps of his hero, his grandfather, who served in the Army.

After boot camp, Johnson was stationed at Camp Lejune, North Carolina, where we would learn how to handle explosives and land mines as a combat engineer. Soon, he would be part of the initial forces to invade Iraq post-9/11.

He served in the 2nd Combat Engineer Battalion and completed two tours of duty in Iraq, from March to July 2003 and again from November 2004 to March 2005. He was wounded on the first tour, losing part of his eyesight and obtaining shrapnel in an ambush attack.

“I was really lucky,” he says, “I was only out for a few weeks.” He received two Purple Hearts to honor his service and sacrifice.

After returning to the states, he went to the Engineer Training Area at Camp Lejune, which trains Marines and prepares them for IED attacks and land mines.

When his time was up in the Marine Corps, he returned home to work for TVA. He came to NAEC as a lineman in 2017.

Johnson lives in Hollywood with his family, and in his spare time he enjoys coaching his young son’s baseball team.

Even though Johnson’s experience in the Marines was intense, he is glad to be part of such a revered network, “It was probably the best time of my life, with the best people,” he says. “I wouldn’t trade it for anything. That was teh best group of men I’ve ever been around.

“If somebody would die for you, they’re a different group of people. It’s a different type of brotherhood. They call it ‘America’s Finest Fighting Force’ for a reason.”