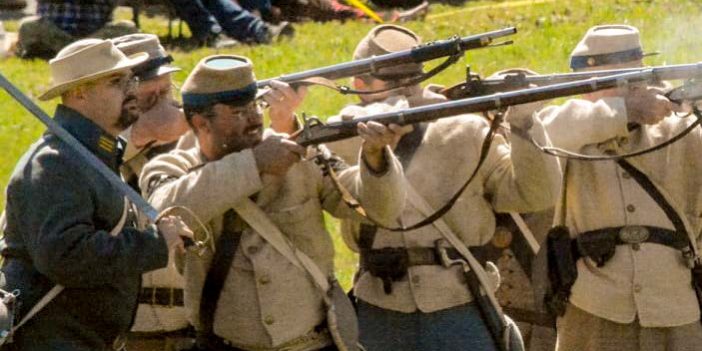 The 18th Alabama/63rd Ohio Infantry will host a reenactment of the Skirmish at Fort Harker on October 1 and 2. The battle portion of the event will take place on Saturday, but the camp will open at 9 a.m. on both days and offer visitors demonstrations of what life was like in the 1800s.

“This will be the first reenactment ever at Fort Harker,” says Jarrod Farley, a member of the 18th Alabama/63rd Ohio. “We are happy to bring this event to north Alabama.”

Originally, the group scheduled the event in 2020, but it had to be postponed. Members of the 18th Alabama/63rd Ohio Infantry attended Stevenson’s Depot Days festival earlier this year and performed a living history event for attendees. “The City of Stevenson has been nothing but great to us, and we really appreciate it,” Farley says.

Jarrod and Stephanie Farley met in 2008 at a Civil War reenactment in Tunnel Hill, Georgia. Both were active with other reenactment groups, but once they locked eyes at the Saturday Night Ball, they knew they had to get to know each other better. The couple married in 2013, holding their wedding at the same event where they’d met five years earlier. The rest, as they say, is history.

Today, Jarrod Farley works as a shipping and receiving manager during the week, and Stephanie Farley is a stay-at-home mom. The two have devoted much of their time to re-creating scenarios and educating others about how people lived during the Civil War. Their family, which now includes four daughters ages 7 and below, spends many weekends traveling to different reenactments in the area, setting up camp, and enjoying the simplicity of older times.

Reenactment participants dress in period costumes, usually made of wool, and the Fort Harker event will showcase aspects of life at a Civil War-era camp beyond the soldiers’ experiences.

“I show children’s demonstrations, including toys those children would have played with,” Stephanie says. “There’s a woman who has an authentic laundry press she brings and shows how they would’ve done laundry during that time. We also have a seamstress.”

Author Brad Quinlan will be there, with his display of letters written by soldiers. There will be food, vendors, dance exhibitions, a blacksmith, and even a medical crew demonstrating what medicine was like during that time period.

“We want the public to come and go as they want and enjoy the day,” Stephanie Farley says.

“During the Civil War, Stevenson was a supply depot. When the federal army pushed to take over Chattanooga, they used Stevenson as a supply base,” Jarrod Farley says, adding that Gens. William T. Sherman and William Rosecrans both had a presence in the area at some point. “At any time Stevenson could’ve had between 5,000-10,000 federal troops in the area.”

Fort Harker was a federal garrison camp, meaning troops were stationed there to protect the depot and the supplies. “There was a lot of guerrilla fighting around the fort,” Jarrod Farley says. “We’re very sure that at some point there were running battles around the area.”

Fort Harker is listed on the National Register of Historic Places. Built in 1862 by the Union Army on a hill overlooking Crow Creek, the fort was abandoned after the Civil War. The site became a city park in 1985.

“I’ve always been a history buff and always enjoyed history,” Jarrod Farley says. “It’s nice to be around other like-minded people who also enjoy history. The city of Stevenson has a great opportunity to promote this fort, which is a historic jewel.”

Making history and friendships While the Farleys like camping most weekends, they admit their real joy comes from seeing how much their children enjoy the events. “I put them in this hobby and let them get a history lesson,” Jarrod Farley says.

“They really do enjoy it. We took them to an event, trying to feel out if it’s something they would like, and they were crying because they didn’t want to leave,” Stephanie Farley says. “Their enjoyment is our enjoyment.”

Another thing that drives the couple is the lifelong friendships they’ve made along the way.

“They’re more than just friends,”Jarrod Farley says. “I’ve taken breaks over the years and stepped away from doing this before because life just gets busy, but the friendships and my love of history are what keep bringing me back.”