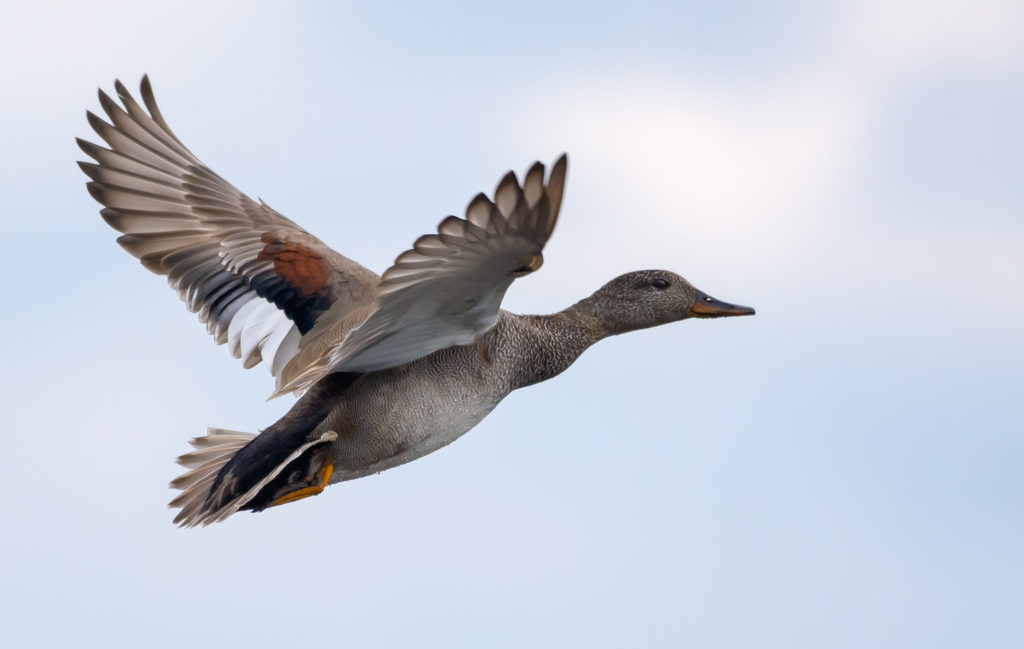 Courtenay Conring often fished as a youngster growing up in north Georgia, and as an adult she enjoys a career as a wildlife management area biologist for the Alabama Wildlife and Freshwater Fisheries Division in Jackson County.

“To me there’s no money in the world worth what I get to do every day, you know?” she says. “I wouldn’t trade it for anything.”

Jackson County’s range of habitats provides Conring with plenty of work. “This part of Alabama is really unique,” Conring says. “There are few places in the country that you can go that has this large of a body of water, Lake Guntersville, adjacent to mountains. It’s a really diverse region of Alabama.”

Jackson County attracts birds of all types because it serves as a good resting place for several species as they migrate each year, specifically the ducks, geese and swans that frequent the area.

Migratory waterfowl begin appearing in September with the teal duck, named for its blue-tipped wings. The majority of other species appear in the area between October and February.

The migratory patterns pave the way for one of Conring’s major responsibilities — the management of water flow. She helps direct the use of giant pumps that release water into or out of the Tennessee River to benefit waterfowls’ needs at different times of year.

In the spring, water is pumped out, and plants such as corn, grain sorghum, Japanese millet and rice are sown to provide a source of food. Meanwhile, state officials spray to remove invasive weeds like cockleburs in an effort to encourage native, duck-friendly grasses such as barnyard grass to flourish throughout the summer in the remaining wet areas. 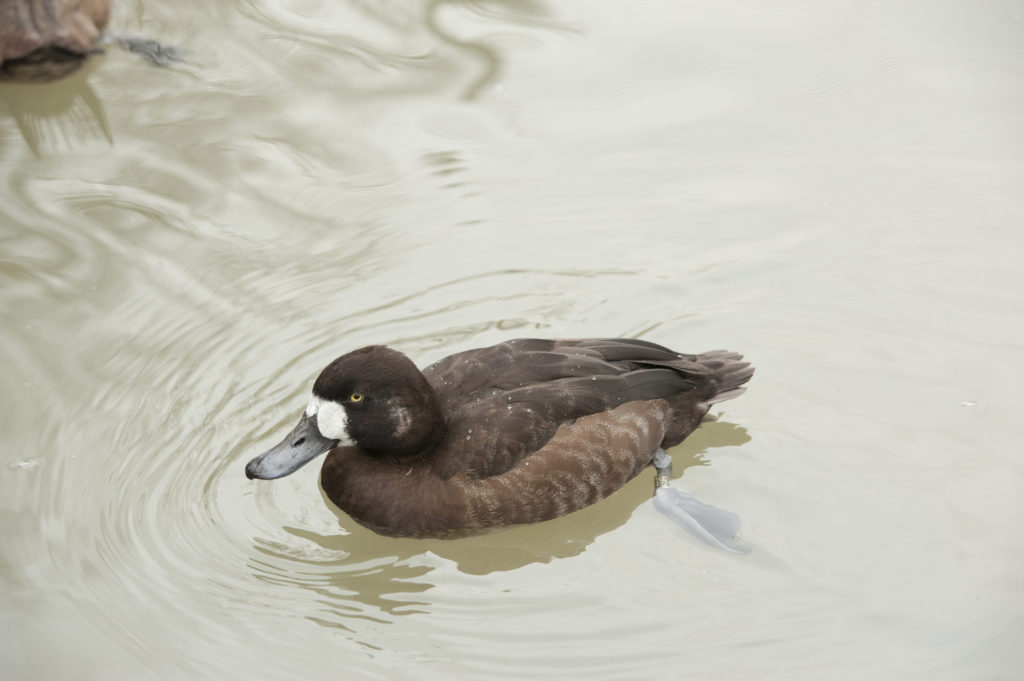 Just before the waterfowl return in the fall, water is allowed to flow back into the drained areas. As the vegetation dies out, small crustaceans and water bugs return to provide food for the ducks.

When the ducks leave to head back north, officials pump the water out again to continue the cycle.

Migratory patterns also present Conring and other wildlife biologists the task of monitoring the flight patterns and the numbers of several species of birds. Before the migratory season and in midwinter, Conring flies over the Guntersville reservoir to record the species, the number of birds and the areas they are visiting.

Currently, she also assists with a project that tracks the movements of gadwall ducks from Jackson County to Decatur within the Tennessee River Valley. For this project, officials outfit the birds with transmitters and bands that record their age, sex and the day they were caught.

The information helps experts, including flyway councils, share data about these birds to best track and manage their populations, Conring says. Flyway is the term officials use to describe the main channels the birds use to migrate.

During the 2017-18 season, 34,000 ducks were reported on the Guntersville reservoir, though the five-year average is 19,000, Conring says. That increase may indicate that management practices like Conring’s current project have worked, including in Jackson County.

If someone finds an injured duck, wildlife biologist Courtenay Conring recommends leaving it alone. Though some ducks can be injured by power lines, she says the birds may only be stressed or tired and could recover in time. If really concerned, you can find contact information for licensed and experienced wildlife rehabilitation experts on the Outdoor Alabama website.

“Migratory birds are an entity that is prized by people all over the continent,” she says. 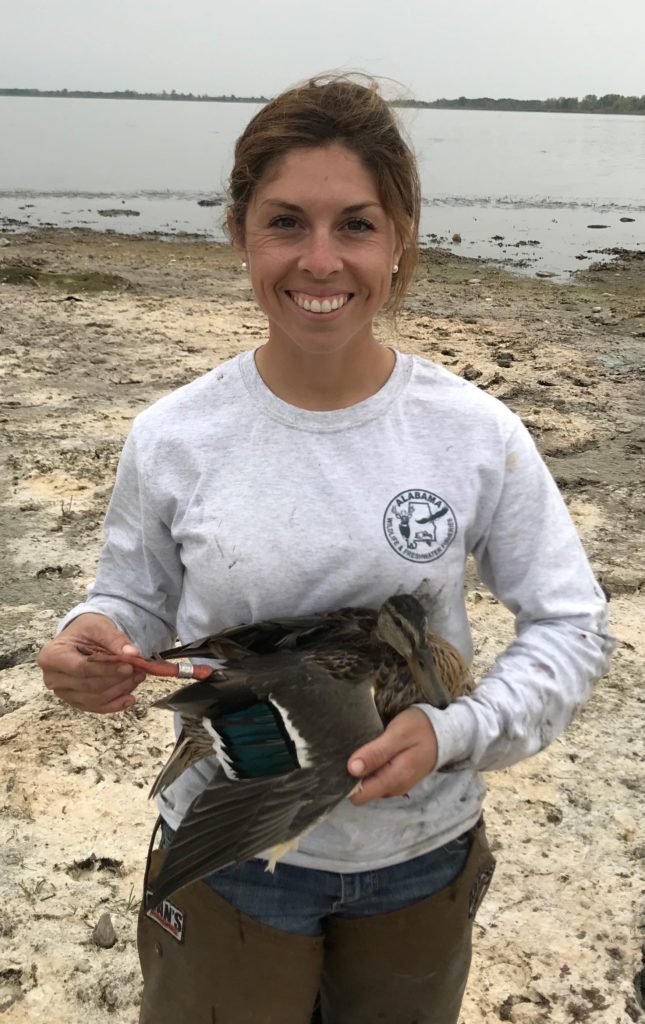 The monitoring aspect of Conring’s job allows her to travel occasionally, as well. Last year, she and a colleague visited a banding station in Canada to help band ducks there.

Conring also serves as a member of wild turkey and migratory game bird committees for the state and attends flyway council meetings that help set regulations for bird populations.

Off the clock, Conring still finds herself returning to Mother Nature. When not in Alabama, she travels to places like Oklahoma to visit woodlands there.

And when she’s not in the great outdoors, Conring may be discussing wildlife with local high school Future Farmers of America clubs to educate students on habitat management, regulations and careers in biology.

Similar discussions when she was in high school inspired Conring, who earned a bachelor’s degree from the University of Georgia and a master’s degree from Texas Tech University, to choose the career path she has.

“I knew from then on that was where I was going to be my happiest — finding a way to make a living outside,” she says.

Blue-winged teal: Both the male and female of the species possess blue covert feathers that cover other feathers on their wings. Males have a slate gray head and neck, and their breasts and sides are tan with brown spots. Females are brownish-gray with darker crowns and olive brown breasts.

Gadwall: Males are grayish-brown with white bellies, black rumps and a slate-gray bill. Females have a similar look, except they appear to have more smears of brown and possess a yellowish bill.

Northern pintail: Long, slender ducks overall, the males have chocolate brown heads with white stripes on each side of the neck that extend to a white breast and belly. Their backs are blackish-gray, and the rumps display a white patch on each side. Females maintain a dark brown upper body with either brownish-yellow or gray heads and lower bodies.