More Than a Hot Dog 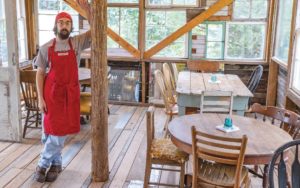 Redmon Graham is the owner of Downtown Dogs in Stevenson.

Redmon Graham spreads positivity throughout downtown Stevenson one hot dog at a time.

The owner of Downtown Dogs, a popular lunch destination, is a self-proclaimed proud Stevensonian whose glass is always half full.

“I’m not ordained by any stretch of the imagination, but I preach happiness and kindness,” Graham says. “Be kind to your neighbor and, if possible, do a good deed each day.”

Graham grew up in Stevenson and still calls the city home. “It’s a wonderful and beautiful place in the world, full of exceptionally wonderful people,” he says. “I may travel, but this place will always be home.”

Graham shares a vision with other locals and Main Street residents for preserving the historic buildings and welcoming more businesses downtown.

“Stevenson has always been rich in local history and we are just trying to bring that back,” he says.

Downtown Dogs is in Graham’s house, a historic home in downtown that’s been in his family for generations. “It’s actually a kit house from Sears, Roebuck, and Co.,” he says.

The Woodall family built the house in 1924. The pieces of the home were delivered by train from the Chickamauga Lumber Company, with every board pre-cut and numbered. Between 1908 and 1940, Sears, Roebuck and Co. sold around 70,000 kit homes from their catalogs, ranging in prices from $800 to around $2,500.

Downtown Dogs opened in 2017 in a treehouse on the property. It was a unique operation, but the demand of business quickly moved the business into the current space. Since that time, Graham has remodeled the home’s kitchen, back porch and added another room to the back of the house to accommodate more customers. 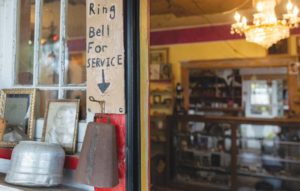 Professor A.J.R. Graham’s Odditorium is a collection of found items and art.

The restaurant is open seasonally from late March through October. Graham says his family and friends help him get the space ready for business each season.

Everything is cooked to order, and occasionally Graham announces a special on his social media pages, but everyday items include all-beef hot dogs, bratwurst, and Polish sausages with all the fixings.

Visiting Downtown Dogs is an experience. Visitors are greeted with Professor A.J.R. Graham’s Odditorium upon entry, and the restaurant is in the back. The Odditorium is filled with pieces of art made by Graham, who collects interesting items he turns into art. He also plans to convert the entire house into restaurant seating.

“I really want to create an ambiance and just surround and submerge people in art,” he says.

Graham is a folk artist. He describes his work as technically “mixed media” but says it’s more found objects. “If I see something in a parking lot, I’ll pick it up and try to make a face out of it,” he says. Over the years, his style has evolved, and he has done clothes, jewelry and even handmade wooden furniture.

“It’s just cool to see what it turns into in the end.”

His work is inspired by found objects, but he realized his interest in art while growing up at his family home. The historic home was used as a Union hospital during the Civil War, situated on a property at the foot of Cumberland Mountain. Graham says there was a trailer park on the property at one time with no local trash service, so residents would burn trash.

“As a kid, I’d be out playing in the yard and find all kinds of things,” he says.

The rainwater would come down the base of the mountain, flooding the creek and flushing out forgotten items left behind like spoons, leather shoes, and even a Roy Rogers cap gun.

Graham and his cousins would make collections out of these priceless treasures, and as a teenager, he began seeing the art in the found objects.

“I just love to get in my zone and do my thing,” he says.

Graham’s vision for his business doesn’t just stop at hot dogs and art. He wants to turn Downtown Dogs into a place where people can gather and find a sense of community. A guest book sits out for people to sign, and so far, he’s had visitors from 32 states, and even as far away as France.