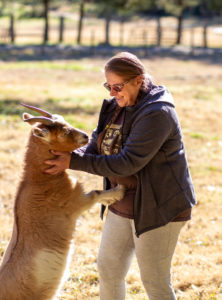 April Russ plays with Peanut, one of the goats at Shamballa.

Shamballa Wildlife Rescue is tucked away from the world on a dirt road surrounded by woods. But to John and April Russ, Shamballa isn’t just a place. It’s a state of mind.

The couple made their property in Woodville a peaceful sanctuary for rescued animals. They established Shamballa 10 years ago, and they acquire more animals each year.

“Our biggest year we had about 80 animals, and that year we were taking possums and squirrels, as well,” April Russ says.

The inspiration for the name Shamballa was from a trip to Nepal. The word translates to peace and harmony with nature and animals, or “place of peace.”

“I was looking for my own Shamballa, and I found it here,” she says.

Originally from Belgium, Russ spent much of her childhood in Zaire. Her father worked as a mining engineer and would often bring animals home for her to take care of and befriend. Most notably, she had a baby giraffe named Frida. 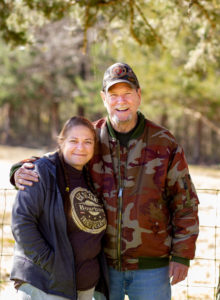 “I was big into ABBA at the time,” she says, noting the name inspiration came from one of the band members. “That was in the 1970s.”

Even with access to so many exotic animals, including baby crocodiles that lived in her family’s backyard pool, the young April still had a fondness for one species in particular — raccoons. But there were no raccoons to be found where she grew up, so now she truly loves working with them every chance she gets.

John Russ has also always had a love for animals. At 16, he worked at the Kim-O Pet Shop on Governors Drive in Huntsville.

“I’ve had a hamster since I could walk,” he says. “I’ve also had baby squirrels and birds. One time I brought home a three-legged guinea pig.”

After joining the Marines and serving in Vietnam as a helicopter structural mechanic, Russ found himself in California. “I loved the weather and ended up staying there for almost 26 years,” he says.

He volunteered at the L.A. Zoo and at Wildlife Waystation, an organization that rescues exotic animals that have suffered abuse. But in 2008, he packed up his Toyota pickup and moved back to Alabama.

Russ says he and April met online through some mutual friends. They bonded over their love for animals. Soon, she came to visit him and never left. They just celebrated 11 years of marriage in December.

One day, while out on a drive, the couple took a turn on a dirt road and fell in love with the cabin and land they now call home.

“I met April, and we both decided we like being out in the country,” Russ says. “It’s a dream come true.”

Teach a Raccoon to Fish 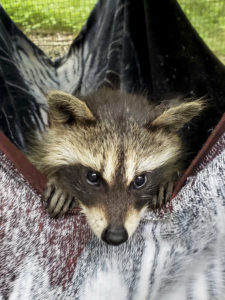 Shamballa Wildlife Rescue serves as an animal orphanage and rehabilitation center. It is one of the few licensed rabies vector species wildlife rehab centers in the state. Working closely with the Alabama Department of Conservation and Natural Resources, the facility specializes in rabies vector species animals, which are animals with potential to carry rabies. RVS doesn’t necessarily mean the animal has rabies, but it could be more prone to get it than other species.

The center takes in abandoned or found baby animals. Often, fawns are found near where their mothers were hit by a car, shot or injured. People also find abandoned or displaced animals and notify the Russes. April Russ raises the animals and feeds them according to their nutritional needs, which includes some bottle feeding. 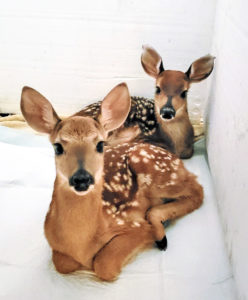 Fawns and raccoons are bottle-fed before being released to find food on their own. Photo courtesy of April Russ.

The Russes’ mission is not to make pets out of these animals. When the animals are grown or healed enough to survive on their own in the wild, they are released within 10 miles of where they were found.

It takes about five months for a raccoon to be ready to be released back into the wild. During that time, the animal is taught to climb trees and even how to fish.

“When they’re very young I give them their first wading pool,” April Russ says. “Raccoons love water, it helps their dexterity.”

She starts putting ice cubes in the water, and after a couple of days, the raccoons understand how to grip the cubes. Then she buys minnows for them to learn to catch in their pool. After they master grabbing the minnows, she catches fish for the raccoons so they are more familiar with what they’ll actually be surviving on when they are out on their own. 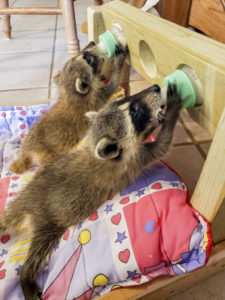 The acres at Shamballa have seen many animals come and go over the years, but a very special girl named Delilah still comes back to visit. She was the facility’s first rescue, a tiny fawn that weighed about 4 pounds and was just 2 weeks old.

A young couple found Delilah, whose mom was struck and killed trying to cross the highway in Stevenson. The Russes bonded with her and nurtured her. She was bottle-fed before being released into the outdoor enclosure.

Soon, more fawns were brought to the rescue, and Delilah watched after them like they were her own. Eventually the deer were let out to graze, but they still returned in the evenings for their bottle.

April Russ often walks out to the edge of the woods whistling a tune, specifically a Christmas carol. She says she chooses a Christmas song because it’s out of season for the majority of the year. Her fawns recognize who she is and that she is harmless.

“I speak French, English, raccoon, and deer,” she says.

Delilah was eventually released, but year after year she returns with her own fawns to graze in the same space where she grew up. She is identified by a notch in her ear, an injury she received when she was caught on barbed wire. 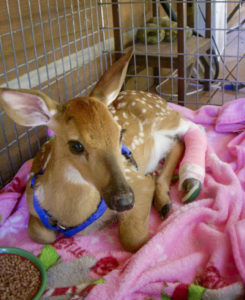 If a fawn is seen alone, the Russes urge people not to move or relocate it. It’s completely natural for a fawn to be left by itself for a short time while the mother is out foraging for food or has been scared off by humans. Whatever the reason, it is wise to leave the fawn where it is.

“Mothers will come back for their fawn,” John Russ says.

While Delilah certainly has a special place in their hearts, the Russes cherish and remember each rescue that has come their way. “I learn every day,” John Russ says. “They teach us as much as we teach them. That’s why we wanted to share these stories.”

He released “Critter Tales: Adventures in Rehabilitating Wildlife” in 2020. It’s a book filled with stories about the mission of Shamballa Wildlife Rescue, how the center got started, and notable rescues that have changed the Russes’ lives.

“You need a purpose in life bigger than yourself,” April Russ says. “Wildlife is so misunderstood — this is our contribution to this world and to life.” 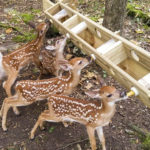 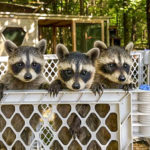 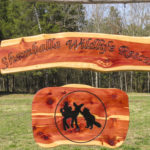 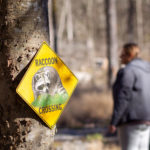