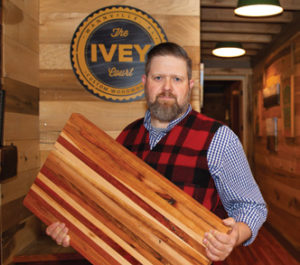 Some of Jason Shrader’s most popular pieces are wood cutting boards.

An old, fallen tree laying on the side of the road is often seen as just that — an old tree. But Jason Shrader sees the beauty in what the wood can be, and he strives to bring out its potential.

Shrader doesn’t love the title “jack of all trades,” but that’s exactly what describes him.

“I do different things all the time,” he says. His skill set ranges from tiling showers to making tables and a lot in between. But woodworking is where his true passion lies.

Shrader doesn’t work with the type of wood you can go out and buy at any lumber store. He prefers wood with lots of character.

“That’s what I gravitate toward,” he says. “I like boards with knots and cracks that look unique.”

Making functional pieces like cutting boards and tables takes up most of Shrader’s time, but he really loves the accomplishment of breathing new life into old wood. 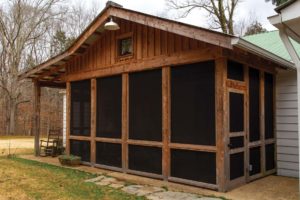 Shrader harvested wood from the Russell property to build this screened-in porch.

“My interest in woodworking is the old wood — we try to uncover it and bring it back to life to let it tell its history,” he says.

He enjoys making Christmas ornaments for his friends and family each year, using pieces of wood that aren’t able to be used in any other project.

Shrader’s work is mainly known by word of mouth, with the exception of social media. At one time he set up his workshop at a building he bought in downtown Stevenson. After several years there, he began working out of his shop from home, which is what he does currently.

He wanted a unique name for his business and decided on The Ivey Court, inspired by a road he once lived on.

“When I see an old piece of wood I think I can turn or make something with, I throw it in the back of the truck to save it from being burned,” he says. He is always trying new techniques and expanding his skills. 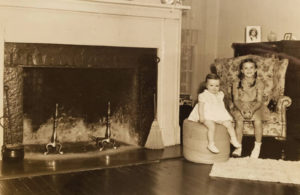 Emily Russell Campbell, and her sister, Mary, sit at the fireplace in their childhood home in the late 1940s.

Building has always been in Shrader’s blood. He grew up on a farm in Wannville and currently lives less than a mile away from his childhood home. “At the farm, we were always building fences, so I had a general understanding about some construction growing up,” he says.

After graduating high school, he went to college at the University of Alabama in Tuscaloosa. He started building furniture, making pieces for himself while in college.

During the summer, he worked for a home builder as a member of the trim crew. “We would go to a house site and flag and mark boundaries for the brick layers, then come back to hang molding and install baseboards, doorknobs, and other finishes like that,” he says.

During that time, a master craftsman took Shrader under his wing, and he learned a lot of techniques from his time working with him. 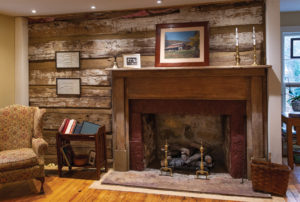 In 2000, Shrader graduated from UA with a degree in business management and computer science. He accepted a job with Browns Ferry Nuclear Plant in Athens, where he operated the facility used to purify water to produce electricity.

“I worked by myself,” he says. “There were days I’d work every other day, and with the time off I was either doing farm work or I was doing side work for people, like building decks or remodeling a bathroom.” As the days passed, Shrader just wasn’t feeling fulfilled with his work at the plant.

“It wasn’t that I wasn’t happy. I was just producing numbers and turning the same levers every day,” he says. “The only time I felt a challenge with that job is when there was an outage.”

After some reflection and evaluating what he really wanted in life and his work, he promised himself he would get his homebuilder’s license before he made a decision about what he would do. He decided to walk away from his job, after giving his boss a one-year notice, and he went into business for himself.

Even though he took a huge risk leaving a steady job, Shrader knows he is where he is meant to be. “I couldn’t imagine sitting at a desk from 8 to 5 doing that type of work,” he says.

A photo of the brick veneer that was removed to expose original logs.

He began residential remodeling in 2006. After receiving his license he considered becoming a custom home builder, but with the housing market crash in 2008, he was able to maintain his current business.

While he finds a lot of fulfillment in his work, Shrader says, craftsmanship and doing the job well aren’t his only concerns.

“The client’s reaction is big,” he says.

Occasionally, Shrader’s clients will ask him if he has a vision for the finished product. If they like what he’s thinking, they give him creative freedom.

“That’s when I know I have to produce something they are going to like,” he says. “When you do that, you take a chance on yourself. If they are beaming at the end, you know you did it right. Ninety-five percent of the time that’s what happens, and that’s what keeps me going.”

Currently, Shrader is working on a project to help restore a 200-year-old cabin in the Stevenson area. The house is the client’s family home, and Shrader is helping bring back some of its original glory.

“We’re exposing the walls, taking carpets out, and removing drop ceilings,” he says.

During the restoration process, the owner told Shrader she wanted a screened porch on the back of the house. Shrader harvested cedar trees on the client’s property that had been damaged in a storm. “Everything I needed for the inside came from that farm,” he says. “Now she has a room on the back made from materials that came off her property.”

This table is made using gym bleachers from Stevenson High School. 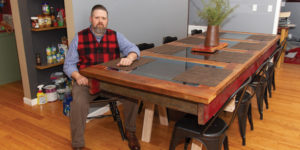 Shrader sits at a kitchen table he made from sorghum pan, originally belonging to his grandfather.