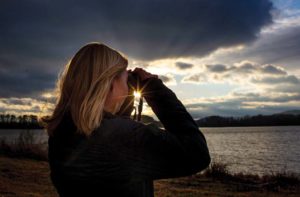 Brittany Hansey looks over the water of Crow Creek.

Brittany Hansey may be far from home, but she feels comfortable anywhere she gets to be outdoors. She dedicates her time and education to learning more about waterfowl, including their habits and migration patterns.

As an Auburn University graduate student, she is working on a project with two primary objectives: to determine if and how hunting affects the waterfowl population on Alabama state lands and in the Tennessee River Valley, and to evaluate if drone-based surveys are better, worse, or equally effective as traditional methods of research. Prior to the accessibility of drones, agencies would conduct surveys via manned aircrafts.

“My project is a novel approach,” she says. Hansey, who is from Bowman, North Dakota, earned a degree in wildlife conservation and management from the University of North Dakota. She made her way to Auburn University after applying for an online program she found interesting.

The waterfowl study, done in cooperation with the Alabama Department of Conservation and Natural Resources, typically puts Hansey in the field from mid-November to mid-February. She began work in the Stevenson area in late October 2020 and expects that one more season in the field will complete the project.

“One day we may focus on Crow Creek, and then Raccoon Creek the next, and then Mud Creek,” Hansey says.

Most of her days in the early fall consisted of setting up preprogrammed paths for a drone to follow. While the drone flies, it takes a photo every two seconds from about 200 feet.

“We fly the drone in the morning and again at night about an hour or two after sunset,” she says. In the evenings, Hansey uses a thermal camera for imaging to determine where the fowl have roosted for the night.

When field season is over, she will review the photos, count the waterfowl and compare those findings to the numbers from before, during, and after hunting season. She will determine if birds are using the waterfowl management areas and whether they are there during the day or at night. 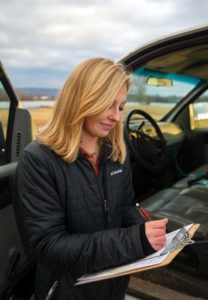 During college, Hansey worked a variety of seasonal jobs that took her across the country. These experiences, paired with the love of the outdoors her father helped instill in her, put Hansey on the right trail she expects will guide her future.

“During undergrad, I wanted to go to school for environmental engineering,” she says. “But eventually, I realized I wanted to work with game species.”

She also became a seasonal park ranger with the Army Corps of Engineers and worked in a variety of campgrounds.

One job took Hansey to the White Mountains of California, where she spent much of her time in the Ancient Bristlecone Pine Forest within Inyo National Forest. While on this assignment, she studied the greater sage-grouse, a species of fowl that is threatened because of limited habitat and disturbance. The sage-grouse spends time on and off the endangered species list.

“In the beginning of the season, we were capturing and collaring the grouse. Throughout the rest of spring and summer, we would monitor them via radio telemetry to determine brood survival,” she says.

One summer she also served as a biological science technician, working with threatened and endangered species. She helped the New Mexico Department of Game and Fish, primarily testing deer and elk for chronic wasting disease.

After Hansey completes her master’s degree, she plans to move closer to home and work as a wildlife biologist for the state of North Dakota.